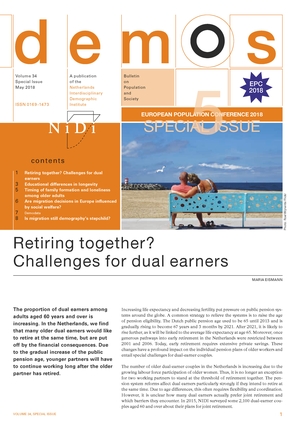 Are migration decisions in Europe influenced by social welfare?

NIDI-onderzoek in 12 Europese landen laat zien dat eenzaamheid onder ouderen groter is wanneer zij In public debates European migrants are often depicted as people who are primarily attracted by the level of social welfare. But is this indeed the case? In-depth interviews with European migrants suggest that they were neither informed nor attracted by the generosity of the welfare state in the country of destination. Empirical findings from both a quantitative study analysing intra-European migration flows as well as qualitative interviews with European migrants in the Netherlands show that the influence of social welfare on migration is clearly connected to the migrant's life course.

Population dynamics across Europe are mainly driven by migration. Not only do immigrants from outside Europe move to Europe, but people are also mobile within Europe. Regulations of the European Union (EU) facilitate migration of EU citizens between member states and establish equal treatment of mobile EU citizens in terms of social rights in the receiving society. At the same time, large differences exist between European countries in the total amount of money spent on social welfare, as well as the welfare domains they prioritize. With the freedom of movement and migrant rights currently figuring high on the political agenda throughout Europe, investigating a potential link between migration and welfare in this context seems an increasingly relevant endeavour. The life course of migrants appears an important yet often neglected element in this respect. European welfare states usually cover a broad spectrum of social services and social insurance (e.g., educational study grants, family allowances, unemployment benefits, access to the public pension system), which makes it likely that people at some point in their lives will be eligible for some type of social welfare. Nevertheless, access to and use of welfare programs varies with personal characteristics, and over different stages of the life course. In our study we therefore examine whether welfare arrangements affect migration decisions of migrants in different stages of their lives.

In line with our expectations, childbearing-age adults (with children) moved more often than older migrants towards countries where the government spent more on family benefits. Countries with higher expenditure in old-age programs were less often selected by migrants in the working ages. Higher unemployment spending in a country was related to fewer immigrants, in particular those of working age. This may indicate that higher spending on unemployment is related to adverse labour market conditions – a factor particularly relevant for migrants at the start of their working career who might accordingly choose an alternative migration destination.

These macro-level findings suggest that the impact of welfare generosity on migration decisions varies over the life course. Similar findings can be extracted from 36 in-depth interviews that we conducted with citizens born in Poland, Spain and the UK and who reside in the Netherlands (see box). Based on these interviews we found that migration decisions were typically shaped by factors relevant to the individual at the time of migration, without them looking very far into the future. Furthermore, little evidence was found that welfare in the destination country had a strong and attracting influence on migration decisions of European migrants prior to migration. Information on welfare arrangements was mostly sought once the need for some sort of governmental support arose. As most respondents migrated when they did not rely on some type of social welfare, this finding may explain why they often did not really consider the welfare state abroad when taking the migration decision. At the same time welfare systems appeared rather complex to compare for individuals as they typically did not experience welfare arrangements in both the origin and destination country. Findings from both studies suggest that the role of structural factors on migration decisions, like welfare arrangements, depend on the timing within the individual’s life course. The life course should thus be brought into both the public and academic debate on how migration and welfare are connected.

Migration data for the quantitative study were obtained from the Integrated Modelling of European Migration database (IMEM, 2013). For the purpose of this study we supplemented the migration data with country level indicators found to be relevant by previous migration research, which were retrieved from databases of the CEPII, MIMOSA, OECD, and World Bank. The qualitative interview data were collected within the Mobile Welfare project (www.mobile-welfare.org) a mixed-methods research project, designed to better understand the role of welfare systems in destination and origin countries in migration patterns within and towards Europe.