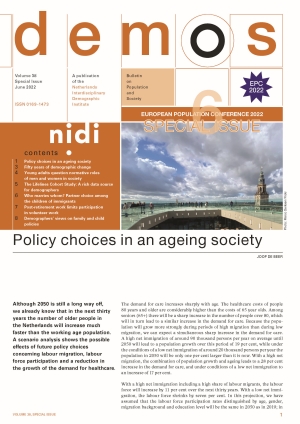 Will the drive towards working longer at ages beyond the public pension age crowd out volunteer work among retirees? NIDI panel data among older workers in the Netherlands suggest it does.

In the last decades, radical changes have occurred in the domains of work and retirement in the Netherlands. Besides dissolving early retirement schemes and increasing retirement ages, policymakers have also been stimulating employment beyond retirement. It has now become more common to work for pay beyond the public pension age, as national statistics show: the employment of people over 70 constituted 3 per cent of the potential labor force in 2003, but increased to 8 per cent by 2020.

The extension of working lives is, however, raising concerns about older adults’ alternative engagements in society. Working after retirement age will ostensibly limit one’s time and opportunities to engage in other activities. How will these developments affect participation in unpaid activities such as volunteering? Retirement is generally associated with an increase in volunteering. Retirees have more time at their disposal, and volunteering offers the opportunity to use this time in a meaningful and socially active way. The international literature on unpaid productive activities in later life does, however, not distinguish between people who have completely stopped working and people who continue to work partially after retirement. Yet, it can be expected that working retirees might engage in volunteer work to a different extent than full retirees because working retirees generally have less free time than full retirees and remain integrated in the labour market.

Using data from the NIDI Pension Panel, we examined the relationship between retirement and volunteering (at least once a week) for a group of employees aged 60-65 years at baseline. We distinguish those who fully retired between 2015 and 2018 from those who work in post-retirement jobs, and compare these two groups of retirees to older workers who remain in career employment. A considerable proportion of retirees in the study (around 15%) kept working – mostly part-time – after retiring from career employment.

For full retirees, volunteering can compensate for the loss of the role as a worker since it can provide social contacts, structure, and the feeling of fulfilling a meaningful role. However, for those who continue paid work after retirement, the post-retirement job already fulfills many of these functions. Consequently, the increasing emergence of post-retirement jobs can reduce the interest in and availability for volunteer work among recent retirees.